Press Release December 2019
With only one more day left for the Galway cycle bus in 2019, we would like to thank all the students, parents, teachers, volunteers and the wider community for their help throughout the year. We have exciting projects on the way in January, including a significant change to our current route.
We’ve made this change for a couple of reasons. Though we would have liked to offer two routes in Knocknacarra as was originally planned, we weren’t able to get a second team of marshals ensuring the high standards of safety we set ourselves was maintained.
This new route will go through the heart of Knocknacarra and based upon the feedback from parents and the schools, we think that it will be more accessible to more children as we’ll be passing through some of the largest estates in the community. For the vast majority of students using the current route, the new route will be even easier to join, and they can’t wait to start.
This route will use quieter main roads and go through housing estates, lanes and alleyways, making the journey to school even safer for the students.
We’ll be starting this route on the first day back to school in the new year. 08.15 from Cappagh Stores on the 6th January. That shiny new bike that Santa is bringing was built to be used. Make it a new years resolution to join us for a spin! See you in the new year!
Press Release August 2019
The Galway Cycle Bus (Knocknacarra) is gearing up to begin its second year of operation and is actively looking for volunteers from communities all over Galway city, to both consolidate its existing service in Knocknacarra, and expand into other communities around the city.
The Galway Cycle Bus is a group of volunteers from the local community who enable primary school children to cycle safely to school on the road, along a set route, and on a set timetable, every school morning. They act as a sort of mobile, protected bike lane for these children.
The Galway Cycle Bus had a very successful first year, completing over 2,600 individual students trips, and clocking up over 4,000km travelled. An average of 16 students joined the Cycle Bus every morning, escorted by parents, teachers and volunteers from the local community, travelling to Gaelscoil Mhic Amhlaigh and Knocknacarra National School.
To ensure the continued success of the existing service, and that a new, second route in Knocknacarra can be rolled-out in time for the new school year, help is required from the community. The initiative relies completely on parents, teachers and volunteers to accompany the children by bike to school, and organisers are actively looking to add more volunteers to their ranks.
Those who have taken part this year, have said that it has been a deeply rewarding and enjoyable experience, strengthening their connection and bond to their community.
There are also plans to expand into other communities in the city. In particular, in Renmore and Oranmore where large schools in close proximity to each other in high density communities would really benefit from such an initiative.
If you are interested in volunteering or looking for more information, please contact the organisers at galwaycyclebus@gmail.com, visit the website at www.galwaycyclebus.weebly.com, or find them on social media @cycle_bus on twitter or www.facebook.com/galwaycyclebus.

RTE News
25th January
We were heavily featured on RTE during our first family day on the 25th January 2018, appearing on the main 1 o'clock and 6 o'clock news bulletins. We also featured on Radio 1's Morning Ireland show.
https://www.rte.ie/news/connacht/2019/0125/1025475-schools-galway-cycling/​
Family Cycle to School Day - 25th January
Press Release
With hundreds of successful journeys completed since its launch in September, Ireland’s first Cycling Bus will host its first Family Cycle to School Day on Friday, 25th January.
Children, parents, grandparents and school staff are encouraged to join the Galway Cycling Bus along its daily route from Cappagh Park to Gaelscoil Mhic Amhlaigh and Knocknacarra N.S.
The bus, which began operating last September, will leave Cappagh Park at 8.15 a.m., and pick up “passengers” at one of the 6 ‘Cycle Bus Stops’ along the route. As happens normally on this daily service, experienced volunteer marshals will be on hand to ensure an enjoyable, safe and healthy experience for all. It is planned to run the Family Day on the last Friday of every month until the end of the school year.
“The idea of the Family Day is to give families an opportunity to try it out and, hopefully, when they see the benefits, it will motivate them to cycle to school every day. Not only will your children’s cycle skills improve, but they will get to school in a healthy and green way  that helps cut congestion on Galway’s traffic-clogged roads. Teachers have noted that the students taking part in the Cycling Bus have more energy and are more engaged in class, which is a great endorsement of Ireland’s first Cycling Bus” said Alan Curran, Galway Cycling Bus Organiser.
Parents and pupils can ‘park and ride’ from Cappagh Park. The Bus will set off at 8.15 sharp and all pupils should wear high visibility vests and helmets. All bicycles need to be in good working order with saddles up to hips, and front and rear brakes working.
The Galway Cycling Bus has been in operation since last September, and has already clocked up over 1,300 km, with 850 individual school trips and on average 15 children aged 4-12 taking part each day. 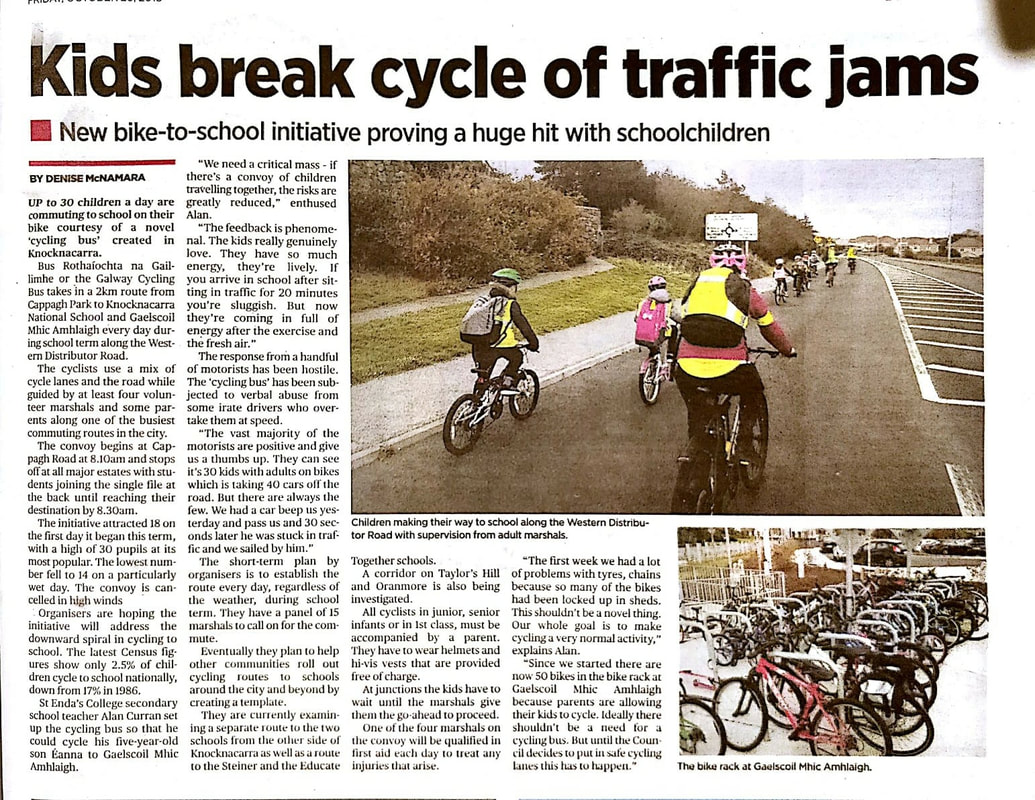 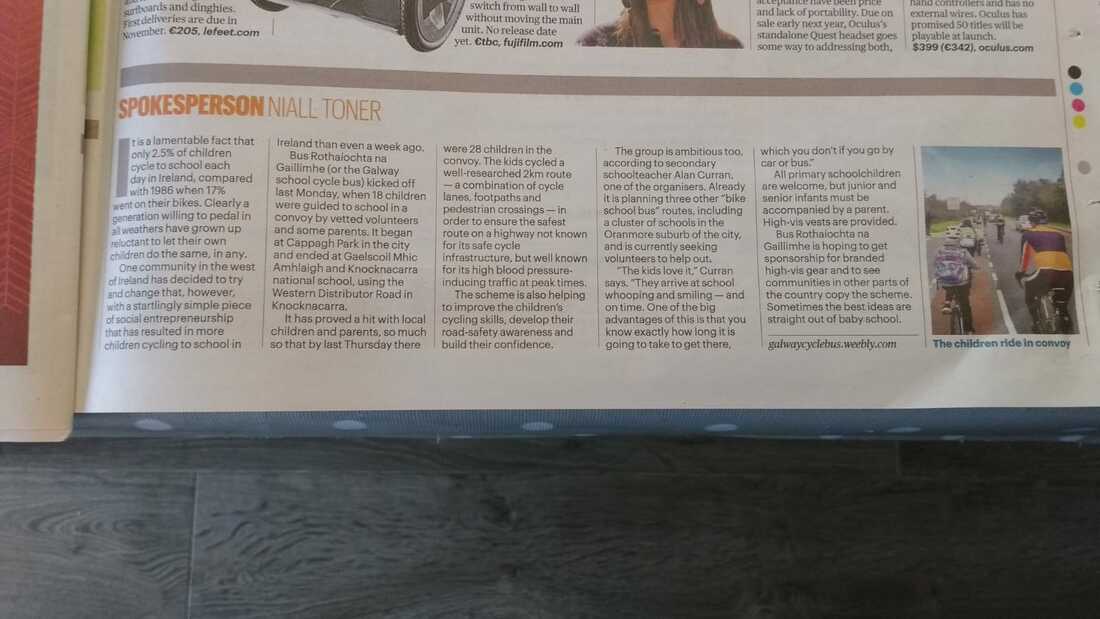 25th September 2018
A lot of people have been in touch regarding the long term plans of this service. Our immediate plan with this cycle bus is to ascertain the viability of this route in the community. Whether there is sufficient demand from the students, and if the support from parents, schools, teachers, and the community exists. The last 2 days has shown the overwhelming support and cooperation from our community and has given us great hope that we can provide this service to our children on a regular, consistent, and safe basis.
Through trial and improvement (and we've generated a lot of feedback in the last 2 days!) we hope to create a working template that can be used to create other routes here in Knocknacarra, and in other suburbs throughout Galway.
We also want to help other schools and community groups around the country who may be thinking of launching something similar. Any data that we generate, any questions on planning, all our research, is available to anyone who wishes to know more.
Lastly, this service should not be needed. With a network of integrated and segregated cycle lanes, children should be safe to cycle to school without an escort. Please call on your local and national politicians to #allocate4cycling.